Today I spent from sunrise to sunset revisiting Great Sand Dunes National Park and taking photos to record what I saw.

From the Great Sand Dunes Lodge where we stayed, I went out before sunrise and saw the dunes in semi darkness. They were stark, almost uninviting.

Soon enough the sun rose over the Sangre De Cristo mountains, setting clouds (it had rained the night before) on fire.

Finally sunlight fell on the dunes, a scene I won’t ever forget.

Later on I went on a short hike up to an overlook point on a nearby hill. Clouds filled most of the sky, but once in a while enough sunlight came through to illuminate parts of the dunes.

As noon approached, the dunes revealed more and more of their beauty. 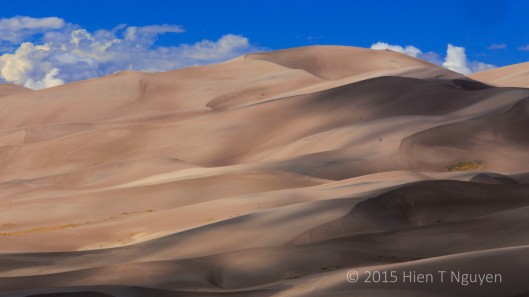 Later in the afternoon, I went back and walked toward the dunes, following hikers of all ages. 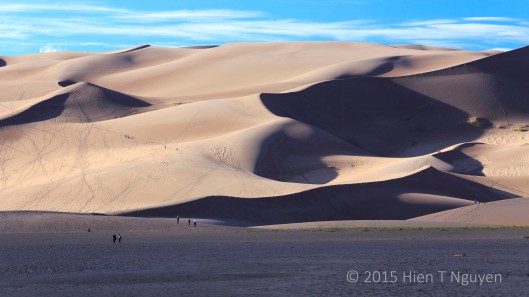 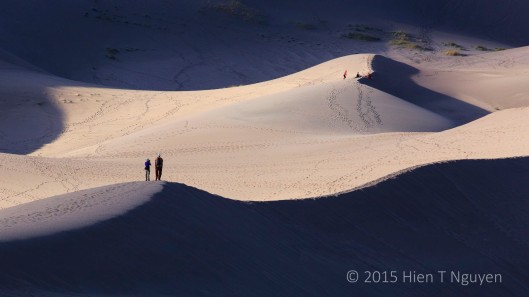 Some even ran down the slopes leaving trails of dust behind them.

Great Sand Dunes National Park is a very family friendly park. I saw parents with kids hiking along the mountain trails around the dunes, or running up the dunes and sliding or simply rolling down the slopes. In the spring and early summer, snow melt produces enough water for Medano Creek which runs right next to the dunes. The creek, with about a foot of water, is then a great playground for youngsters.