Around this time of the year, breeding season makes the Great Egret grow long feathers called aigrettes. Those were much in demand by women more than a hundred years ago, leading to the extermination of 95% of the Great Egret population by the end of the 19th century. Today, they are no longer an endangered species and can often be seen in wetlands in North and South America. The one pictured below was standing by itself, occasionally straightening his neck to look for fish.

Great Egret waiting for fish. Note the long plumes and the green around the eye, signs that it is prepared for the breeding season. 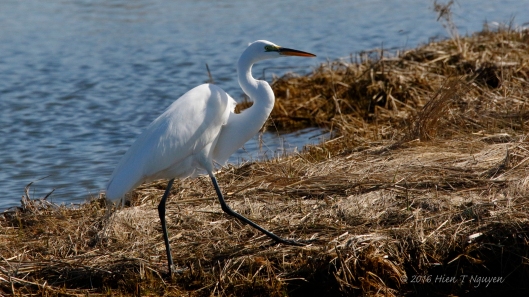 Great Egret moving along shore as he saw fish swimming nearby.

With his long yellow bill, he suddenly jabbed violently at the water several times.