An Lộc was a town we visited on the second day of this trip. It is famous because of a major battle that took place there from April to June of 1972. It was the provincial capital of the South Vietnamese province of Bình Long, in an area with many rubber plantations, including large ones owned by French companies.

Three communist divisions, reinforced by an artillery division, two tank regiments, and numerous smaller units, attacked and encircled An Lộc. An estimated total of over 35,000 North Vietnamese soldiers were thrown into the battle. The communists brought with them long-range artillery as well as tanks provided by the USSR. The goal of the communist offensive was to take over An Lộc and declare it the new capital of a liberated South Việt Nam.

The town was defended by three regiments of the South Vietnamese 5th Division, augmented by local defense forces (regional and popular self-defense forces), and later reinforced by several ranger and airborne battalions. The South Vietnamese forces inside the town eventually numbered 7,500. Only scores of American advisers stayed with the town defenders, but they were crucial in requesting air support from the US Air Force located in South Việt Nam and from as far away as Thailand and Guam. The 5th Division commander, General Lê Văn Hưng, vowed to defend An Lộc to his death, galvanizing his troops’ morale.

The siege of An Lộc lasted 94 days, longer than the 56 days it took to defeat the French at Điện Biên Phủ. In the end, communist troops failed to overrun the town and had to retreat to their sanctuaries in Cambodia after losing 47 tanks and suffering in excess of 10,000 dead. No exact figures have ever been released by North Vietnamese authorities. The South Vietnamese side lost 2,280 killed, 2,091 missing, 8,564 wounded.

During the battle, surrounding communist troops fired on civilians who tried to flee the fighting. Communist policy was to force civilians to stay inside the town to compound human and logistical problems for the South Vietnamese defenders.Their artillery thus fell indiscriminately on the town at rates as high as 10,000 shells per day. More artillery shells fell on An Lộc than on Điện Biên Phủ.

Many civilians sought shelter with the soldiers in their trenches or bunkers, sharing their meager battle rations as the town was completely cut off and airdrops were the only sources of food and other provisions.

There was no building left standing in An Lộc at the end. Schools, hospitals, churches or temples were not spared. Often civilians and soldiers killed remained unburied for many days, only to be shredded to pieces by subsequent artillery bombardment. The stench became unbearable especially for those soldiers conscripted into burial duty. Several mass graves had to be excavated and thousands of bodies or body parts were dumped into them. There is no official number for civilians killed in the battle, but they may very well have been in the thousands.

My first visit to An Lộc was in 1959 when it was still a bucolic town being populated by refugees from the North. Fifty seven years later I returned, but recognized almost nothing.  Streets appeared wider and practically all houses were new, at least compared to other Vietnamese cities.  There was even a plush new hotel and spa.

Family riding motrobike on the road to An Lộc. 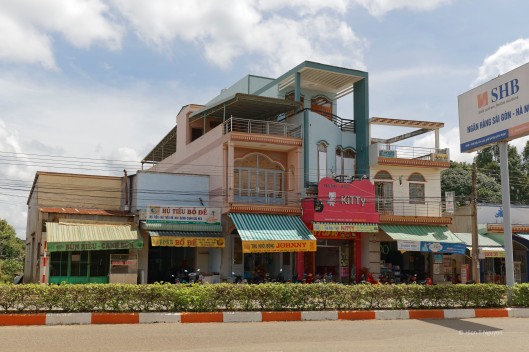 Along Highway 13 in An Lộc.

Main street in An Lộc. 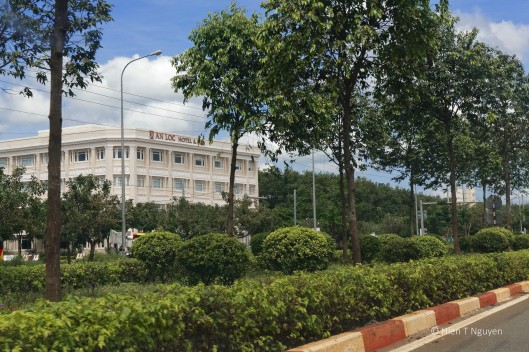 An Lộc hotel and spa.

After some initial difficulty, I finally found two places were the fighting was very heavy in 1972. 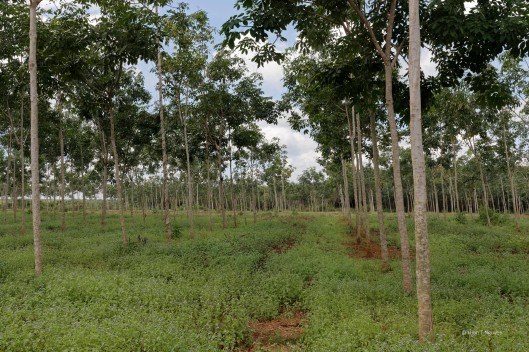 Rubber trees lining up along the Quản Lợi airfield that North Vietnamese troops overran in the first days of fighting.

The road to Windy Hill and Hill 169 where the 6th South Vietnamese airborne battalion fought to hold the hills and allow other units to move to reinforce An Lộc. Only 80 of the battalion paratroopers survived.

These days, there is an official mass grave with the bodies of about 3,000 dead in An Lộc. It was built about a year ago and declared a “revolutionary national historical monument”. However, it bears a blatant and easily debunked falsification of history. A stele at the center of the monument carries the following inscription: “Grave for 3000 people of An Lộc, killed by American imperialists on 03-10-1972.” B-52 strikes by the US Air Force were singled out as the culprit for the 3000 dead.

However, on March 10, 1972, the battle had not even started.  If the date were October 3, 1972, the battle was well over by then. During the battle there were many B-52 strikes, but they only fell on the surrounding areas occupied by communist attacking forces. The American advisers inside the town would have been completely foolish or inept to call for B-52 bombs to fall on their own positions and thus kill themselves as well as their allies and civilians. As it turned out, no American adviser died during the siege of An Lộc.

Unidentified flowers on a tree along Highway 13 in An Lộc.

16 thoughts on “Việt Nam Visit: An Lộc and a Falsification of History”