In my first Osprey Drama post, I wrongly attributed selfishness to the male Osprey who denied food to what I thought was his mate. As Donna pointed out, that younger Osprey was in fact an Osprey chick, his child. Adult Ospreys, male or female, encourage their fledglings to go find their own food by intentionally denying them the food they usually bring back to the nest. Once hungry enough the young ones have to fly out and find fish on their own.

Today I went back to the nest and found the father with another fish in his talon. 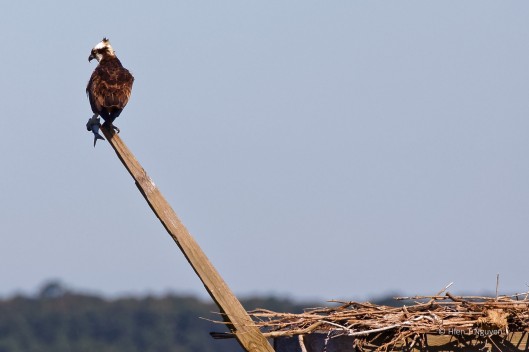 Osprey father with fish in his talon.

He kept looking around, as if searching for the young one.

He looked to his left.

He looked to his right.

I too waited for the young one to return to the nest, for almost 20 minutes. When I left him, he was still waiting.