I arrived at the nest just as the male Osprey brought in a fish it had caught that morning, presumably after it had eaten the head. The female Osprey was waiting with two lanky and hungry young chicks.

Female Osprey with two chicks. Male was in the back after flying in the fish it had caught.

Having delivered breakfast, the male Osprey flew up to his perch, but he seemed to be nibbling something at his feet. 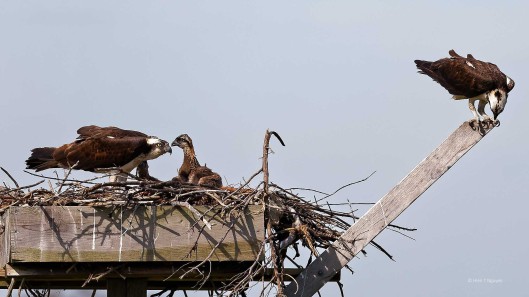 “What is he eating up there?”

Mama feeding chicks while Papa watched out for intruders.