A trip to Big Sur would not be the same if you never drove over Bixby Bridge. Even if you didn’t know where it was, you cannot avoid noticing it as you came near the bridge. First the graceful curve of the coast where Bixby spans over rocky pillars at the two ends of a gorgeous beach, then the throngs of tourists at the north end taking selfies or having their pictures taken, some hovering near an almost vertical drop to the rocks below.

Bixby Bridge, built in 1932. This is the view from the north end of the bridge.

There are several other bridges before and after Bixby, most built in the same year, in the same style, but Bixby stands out because its beautiful lines and setting.

Fleeing the throngs of tourists with an insatiable appetite for photos, I walked to the other side of the road and made a short hike inland. That side also had several cars parked there, and one pickup truck went deep inland, maybe looking for a way to get down near the waves. That was to be proven fruitless. The only way to go down was to hike a treacherous and slippery trail, and you would be trespassing over private land.

Seeing no one at the southern end, I drove over, parked the car and climbed on top of a small earth mound and took the following shot.

Then looking down, the view of the beach was simply breathtaking.

Bixby is the most photographed on the Pacific Coast, and has been featured in movies and commercials, especially car commercials. As I was thinking about that, a red convertible Ford Mustang glided over the bridge toward me. Maybe another career was opening up, who knows?

On our first day in Moss Landing, driving over Jetty Road, I saw a band of White Pelicans standing in Elkhorn Slough. They were the first white ones I ever saw, and the rest of the time that we were in the Salinas area, there were only Brown Pelicans visible.

Brown Pelicans flew almost all the time above us, in squadrons or solo. They were at Moss Landing, Garrapata State Park, and all along that windy road down the coast to McWay Falls.

Part of a squadron of Brown Pelicans flying over the beach at Moss Landing by Jetty Road. 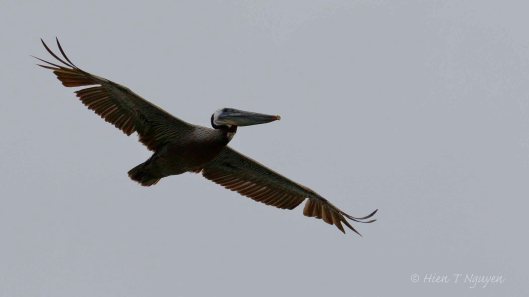 Some were giving surfing lessons to humans.

We went back to Garrapata State Park the following day hoping that it would turn out to be nicer than the rainy and cloudy days that preceded it. However, mornings along the coast were usually cloudy, until the fog was blown inland and the sun was able to come out.

This time we went to gates 4, 7 (again), and 18. Gate 4 has some of the most rugged coastline, with no easy trail to get down closer to the swirling water. It was beautiful, but you could only look, not touch. 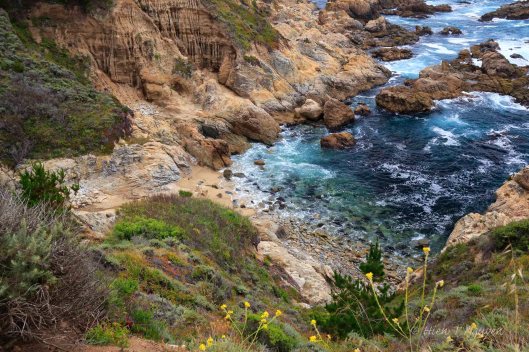 At gate 7, I used a neutral density filter at the two waterfalls to shoot them again and try for a silky water effect. 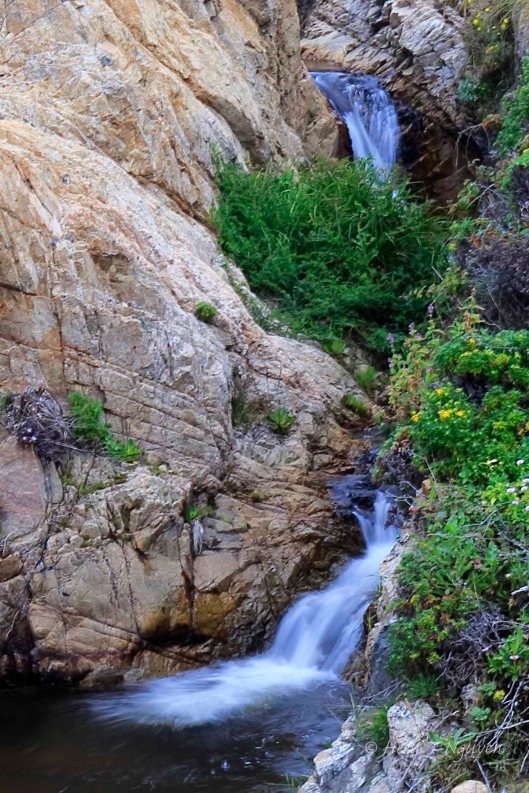 Gate 18 was the next to last gate. There were vast expanses of Sea Figs and other wild flowers, all competing for attention.

Sea Figs and other wildflowers at gate 18, Garrapata State Park.

There was a good path ending with stairs to go down to Garrapata Beach, but it was closed off. The beach was reputed to be a “clothing optional” beach, however there was not one person on it. By the way “clothing optional” was not legally allowed and one could be arrested for practicing it.

Leaving Garrapata, I had to take one last shot of the hills covered with flowers, even though the sun was still in hiding. 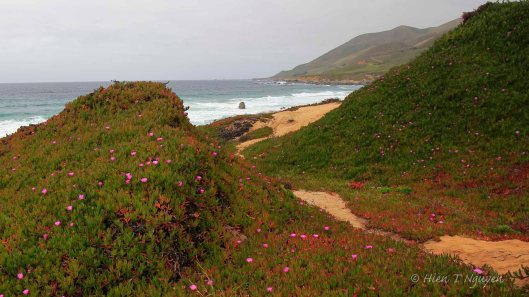 If you drive south from Carmel toward Big Sur, Garrapata State Park is on your right after about 6 miles. Many people usually hurry on to Big Sur without stopping, which is what I used to do.

However, on this last trip, I did some research and discovered that over a distance of 2 miles (3.2 km) Garrapata has 19 access points called gates, each with several trails that lead you down to view points or a beach. Other trails turn inland toward hills with excellent views of the coast from more than 1,000 ft (300 m). I did not go inland, but found the scenery along the ocean simply stunning with its colors and physical features. Spring flowers were in full bloom, and birds and other animals could be seen practically everywhere. If you read this, be sure to click on any photo to see it in a larger size. 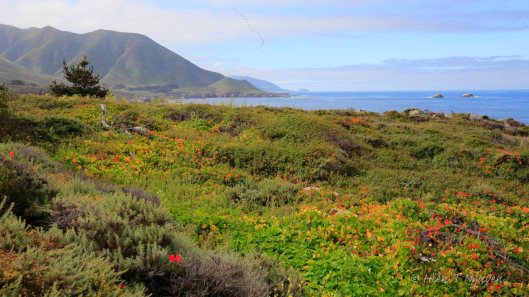 View from gate 1 at Garrapata State Park. Pelicans, seen as a faint line in the center of the picture, were flying toward us from a distance. 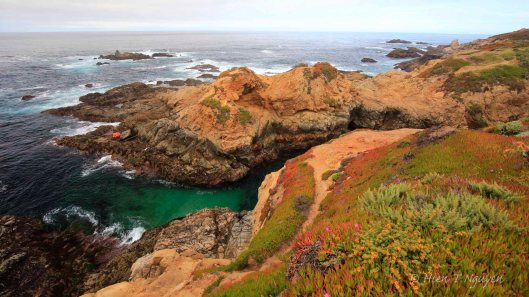 View of the shoreline from Garrapata State Park gate 1. No idea what the two men in orange suits were doing.

View from the end of one trail at gate 4, Garrapata State Park.

Gate 7 is my favorite because it has two small waterfalls created by Soberanes Creek as it flows toward the ocean. 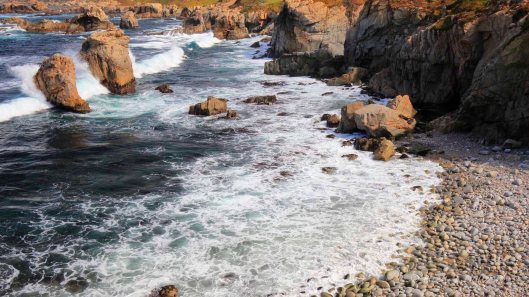 Looking down at a cove at gate 7, Garrapata State Park.

I’ve been taking pictures of McWay Falls in the heart of Big Sur for several years, always hiking the 1/4 mile (1.2 km) trail, going through a tunnel under the highway, and to a small shaded area at the end. This year, I decided to turn left, or south, to go over to the other side of the cove. On the way I took this photo of McWay Creek as it flows resolutely toward the ocean.

Many years ago, using the force of the water, Lathrop Brown, the owner of the property generated electricity for his house with a Pelton wheel which is still displayed in a small shack.

Past Pelton wheel, the trail went upward until the top of the falls was reached. There was a fence to prevent people from going over and bracing myself against it I shot the following photo. The vertical drop is about 80 ft (24 m).

View from the top of McWay Falls.

Turning around, I retraced my steps and went to the other side to take the classic shots of the falls. While the previous days were cloudy and rainy, on that day the sun shone brightly and you could see forever out toward the ocean.

Going back I noticed several Agave plants growing on the slopes, and one had an incongruously tall flower towering over the cove. 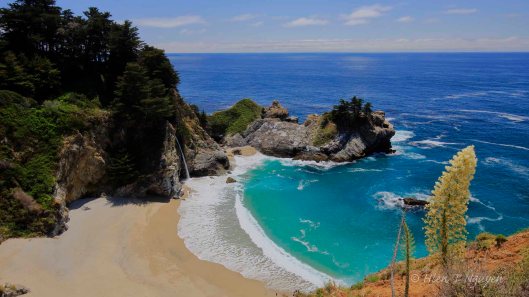 Last week I went to Northern California, choosing Salinas as a center for several day trips to Santa Cruz, Moss Landing, Monterey, Carmel and Big Sur. These cities have some of the most amazing scenery on the West Coast, probably causing me to take too many pictures.

One of the places I liked best was Moss Landing State Beach, 26 miles south of Santa Cruz. I spent two late afternoons there, waiting for and finally, on the second day, photographing a very colorful sunset. The following photos were taken within a span of 16 minutes. By that time the beach was almost deserted, except for a couple of fishermen. 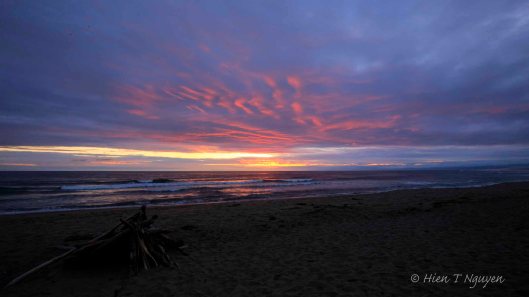 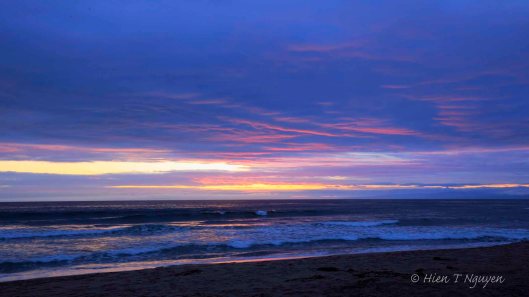 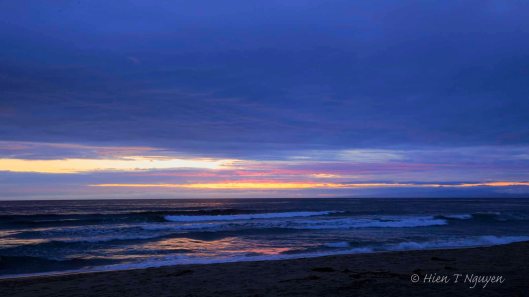 Following is my entry to this challenge: nighttime photo of Bixby Bridge on Highway 1 south of Carmel, CA.

The link to the challenge is: http://abstractlucidity.com/2015/10/28/shannons-creative-photo-challenge-nighttime/

McWay Falls, located in Julia Pfeiffer Burns State Park, 37 miles south of the town of Carmel and almost at the end of Big Sur, is another place that I like to come back to whenever I can. You will see why in the following photos, but as you look at them, please tell me which one you prefer by taking the poll at the end of this post.

These photos were taken late in the afternoon, from different spots on the walking path next to the falls. Some things have changed since I visited this place three years ago. Several boulders have fallen to the beach, and some flowers have disappeared, but this could be a seasonal change. Otherwise it is immaculate, as no one is allowed to go down to the beach. This unique landscape, with the waterfall discharging right onto the beach, is as beautiful and mesmerizing as always, and I highly recommend it to you. 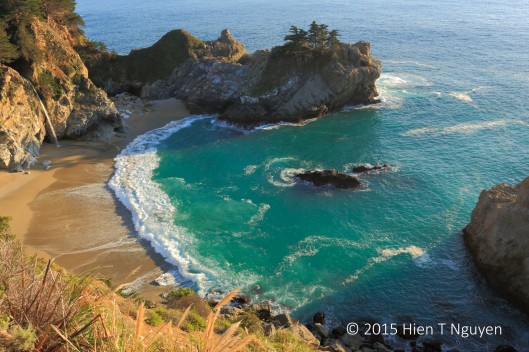 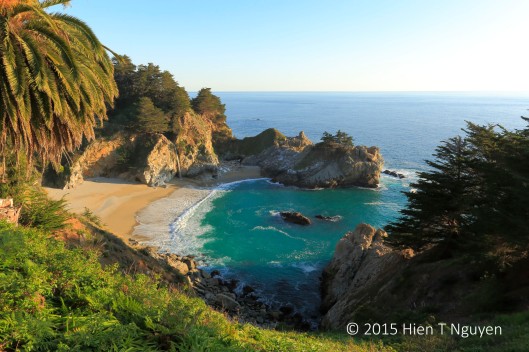 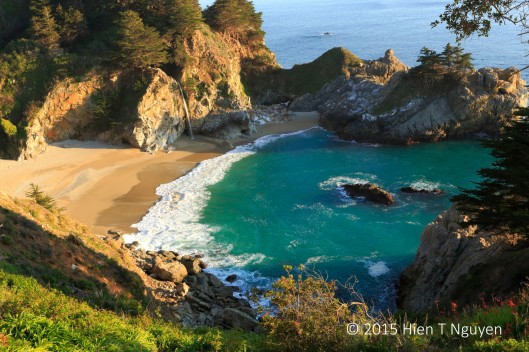 Bixby Bridge was built in 1932 along Route 1 on the Big Sur coastline south of Carmel, CA. It is one of the most photogenic bridges in the world because it is so handsome and the landscape around it so beautiful. You will probably recognize it in many car commercials and in a few movies.

Last week, from the north end of the bridge, the view was breathtaking. 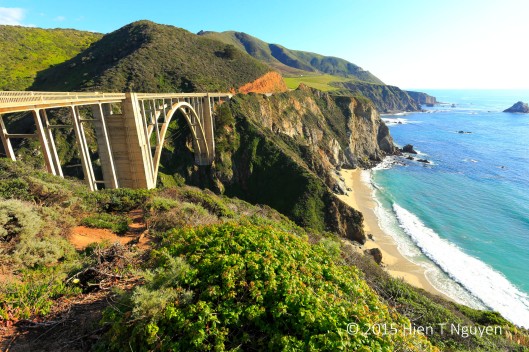 I also shot a few pictures from the back side, looking out toward the ocean.

Bixby Bridge, from the hills looking out.

Later on that day, I came back after the sun set and took this night shot.

The following photo is a cropped version of the above. 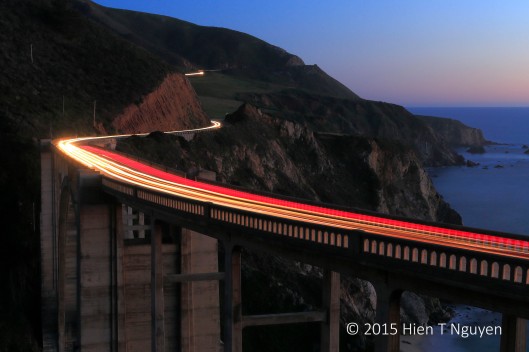 This is my submission for the challenge, a picture of McWay Falls discharging on a secluded beach at Big Sur, CA.