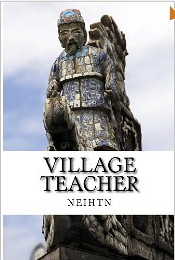 Village Teacher is my first novel.  I started it in 2008 and finally published it in May 2012. It took that long because, for most of the time, I could only write or do research in the evening and on weekends. Not being tied to any deadline allowed me the luxury of procrastinating and doing research and rework whenever I thought it was necessary. On the whole though, the story took shape in my mind toward the end of the first year, and from then on it was a matter of having enough time and patience to let the words flow out and the story take shape.

The novel’s chapters followed one another in an almost natural order, and I did not have to go back and add or delete any significant amount of material. After the initial draft, I did have to move some parts around to make the story easier to follow. Toward the end, I spent quite a bit of time struggling with formatting the book, first for the print version and then for the Kindle version.

Why did I write? One reason was because the examinations system in Việt Nam, even in its modern forms, had always been such a large part of everyone’s life, including those who never took part in any examination.

Many years ago, I read Lều Chõng [Tents and Pallets], a novel written by Ngô Tất Tố in 1952. In it, the author described how the main character took part in one of the last examinations under the Nguyễn dynasty at the beginning of the 20th century. I thought the ending of that novel was rushed, as if the author ran out of time and had to hurry to meet some publishing deadline.

When I started Village Teacher, I noticed on my bookshelves a copy of Vietnam and the Chinese Model by Alexander Barton Woodside in which there were several chapters that dealt with the examinations system. Subsequently, I also found works by Nguyễn Thị Chân Quỳnh, Khoa cử Việt-Nam in two volumes published in 2002 and 2007. They described in even more minute details the organization of the mandarinate examinations and the more salient historical events and characters that took part in them.

With such background materials, I decided to write Village Teacher keeping modern and younger readers in mind, especially the young Vietnamese who, after 1975, either lived or were born in Western countries where their parents fled after the collapse of South Việt Nam. It’s my way of introducing them to a little bit of Việt Nam’s history and culture. Hopefully, more than 100 years after the last mandarinate examinations were held in Huế, this book will allow them an interesting look at a way of life that even their parents or grandparents may only be vaguely familiar with.

However, the book also has a broader appeal than just the Vietnamese diaspora. After all, it is a love story set in a historical era when East meets West, often with calamitous consequences for the former. It is an easy read and the story will get most people keenly interested in its main characters. Some readers have told me that they stayed up late at night to read it to the end. This may explain why other Asian and Western readers of Village Teacher have enjoyed it as much as my fellow Vietnamese.

For those who are interested in reading the book, it is available on Amazon in both print and Kindle versions.

The following review, followed by an interview, is in Vietnamese:

“I read this book without knowing a lot about the history of the French colonization of Vietnam and I thoroughly enjoyed it. The characters are well-drawn, the prose is sparse and to the point and suits the story very well. I would have no hesitation in recommending this book to anyone who enjoys historical fiction.”  Michael Kenny, August 16, 2014.
_____________________

” Village Teacher is a delightful reading. The author blends a beautiful romantic story with the Vietnamese history and culture and the French colonization influences. Throughout the book, the author tactfully incorporates other tales and carefully introduces the family, society structures of Vietnam. I thoroughly enjoyed reading Village Teacher. It’s a well-written book, I highly recommend it. Congratulation to Neihtn!” shopper “amazonshopper” (Texas), April 4, 2014.
_____________________

“This engrossing historical novel is set in the days of the French colonization of Vietnam. The background historical detail appears meticulous and it is interesting reading this book for that reason alone, however there is much more here than that. This is a tale of the travails and loves of the main character during a period of turmoil.

The characters in this story are very well developed and complex and the events that intertwine them are seamlessly presented so that the story flows well. There are numerous characters who appear in a sequential manner and their side stories add to the whole of the story but do not detract from it.

I enjoyed this book for the fascinating historical and cultural perspectives as well as the dramatic fictional story. There is a definite element of suspense and about halfway through the book It became a real page turner and I could not put it down until the end.” Eric, November 25, 2013.
_____________________

“Village Teacher is one of the most unique and delightful love stories I have read in a very long time. Because members of my family did spend time in Viet Nam in 1964 and 1968 through 1970, I was particularly interested in a story set during a historic period prior to the Vietnam War. I knew very little about what it was like during the years of the French colonization or anything about the exam system in place at the time.

While the author does give a very complete historical backdrop of the period, it really is at heart a story about people trying to live their lives during turbulent times of change. When introduced to Teacher Tam you really cannot help but love him and the example he provides of an individual interested in what is best not just for his students but for his country, and the steadfast honesty with which he approaches everything.

The reviews I have read here address so perfectly the complexity of this story so it is difficult to add to how wonderful those reviews are. But, this is a book that is difficult to put down as the reader does become invested in the characters and wants passionately for destiny to unfold as it should in the lives of Teacher Tam and Giang. With various political factions and betrayals at play, this is by no means assured. The story is well paced and well crafted and will keep you anxious to see what the next chapter holds. I particularly enjoyed the tenderness with which the story is told and the underlying understanding of human nature, and the respect for the importance of education and the culture of Viet Nam that the story reveals.

I recommend this tender, historical love story set in Viet Nam during the French colonization without reservation!! I loved it!!” Judith Ann Lovell, review published November 4, 2013 on Amazon.

“Village Teacher is an interesting and informative book about life in Vietnam around the time of the French colonization. The historical facts are true to life and the tale is skilfully intertwined with history and fiction. Not only is the author’s writing method smooth and flowing, but the dialogue between the characters is equally as smooth and believable.

I found this book a delightful read, full of colourful descriptions which capture the magic of the scenery. In my opinion it also accurately represents the changing times when the Vietnamese people became tired of the bindings and oppressions the French had placed on both their people and their land.

The story follows the life of Tam , an intelligent young village teacher, who journeys far to take an examination in the capital city of Hue. After taking his final examinations, it is just a matter of time before Tam will hear if he is to stay on as a mandarin, or return to his quiet village and continue as the teacher there.

Everything seems rather simple and straightforward until one day Tam has the opportunity to save a young lady and her handmaid from a thief. The young lady, Giang, is a beautiful woman with a Vietnamese mother and a French father. Times are turbulent, and Giang’s mother is not supportive of the growing rapport between Tam and Giang. This does not stop their love from blooming, however, and Giang and Tam remain true, supporting one another in close friendship.