The Goldfinch is the official bird of New Jersey and two other states. In our backyard, there is a new male Goldfinch this spring, and whenever it appears my eyes are immediately drawn to its brilliant yellow color. Black wings with streaks of white only enhance its beauty. 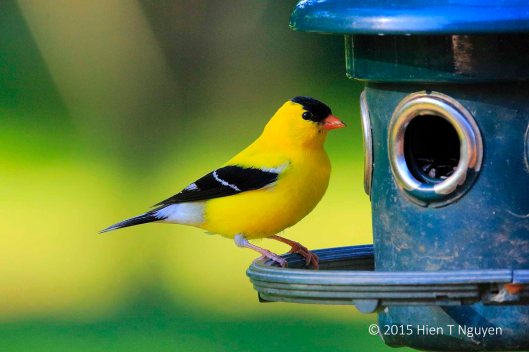 Yesterday it rained almost all day, and it didn’t stop until this morning. More and more birds kept coming to the bird feeder even in the pouring rain. It wasn’t until this morning that the sky cleared and sunlight came out. The air was pure and clear, perfect for shooting the following photos of birds that were born this year and looked very young and innocent. 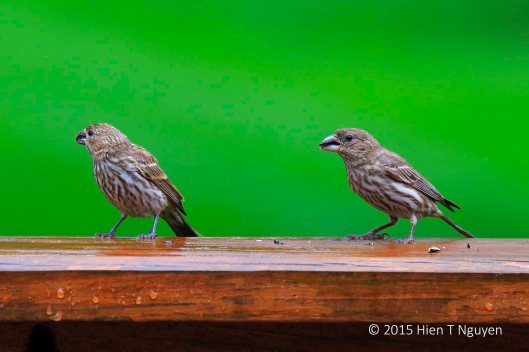 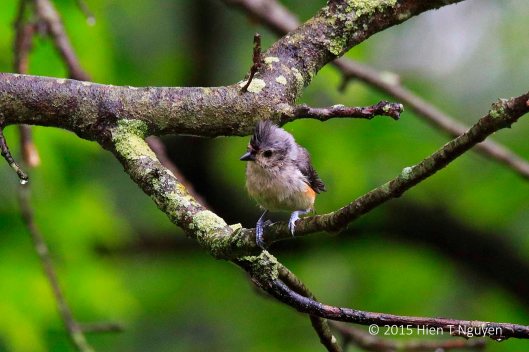 This weekend 13 sail ships and a giant yellow rubber ducky arrived in Philadelphia for a Tall Ships festival. Yesterday, at a bend of the Delaware River, I waited to take their photos as they made their entrance . They took their time, arriving late and spaced a hour apart. So I only took pictures of the first two ships and couldn’t wait any longer for the remaining ones. 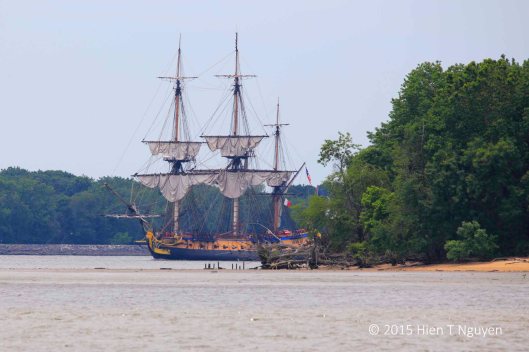 L’Hermione, a replica of the ship that the Marquis de Lafayette took to go help the 13 American colonies fight against the British.

L’Hermione, built in 2015, sailing by the New Jersey shore.

Barque Eagle, originally a German built ship named Horst Wessel, was taken as a war trophy by the United States at the end of World War II.

Barque Eagle, now used as a training vessel by the US Coast Guard. It is based in New London, Connecticut.

Young birds even when they are able to fly still must beg their parents for food since their bodies and skills may not be fully developed yet. Over the past few weeks, I’ve seen bird parents mouth feeding their fledglings, but I was only fast enough to take the following photos of youngsters begging for food from their mother or father. 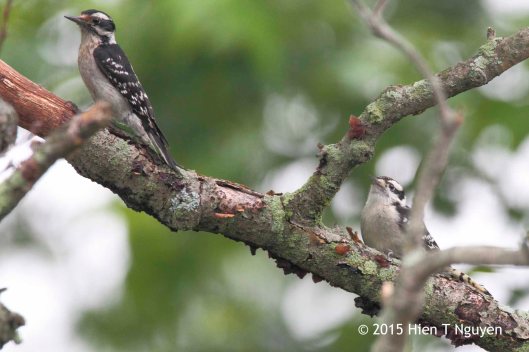 Young male Woodpecker begging mother for food. Note how thin she was compared to his chubbiness.

Young House Finch on top left had just been fed, but wanted more from father at bottom right.

A few days ago I took the following photos of a young House Finch. When I looked at them closely on the computer, the bird’s beak appeared bloody. This bothered me until today when I went out and saw many ripe, red, and juicy wild strawberries covering part of our backyard. The birds had been eating them with abandon and that explains the “bloody” beak and also several patches of red on some oak tree branches. 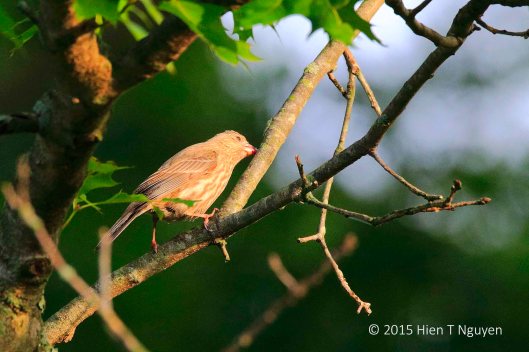 House Finch: note the “bloody” beak. He was perhaps drunk, not wounded.

The male Ruby-throated Hummingbird has the red throat while his female counterpart has a mostly white throat. Yesterday he was not around, at least I did not see him, and a young female, very slender and graceful, came to the feeder. She allowed me to come within 10 ft (3 m) of her to take these pictures. 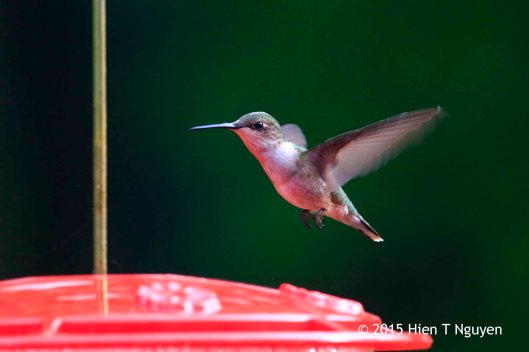 Two White-breasted Nuthatches were flying around our backyard, and from their behavior I think they were involved in some courtship rituals.

Suddenly the bird on the right, a female probably, leaned on the branch as if she was going to sleep.

But only a second later she was up.

The pair continued to fly around together and spent a lot of time running up and down the trunk of an oak tree. 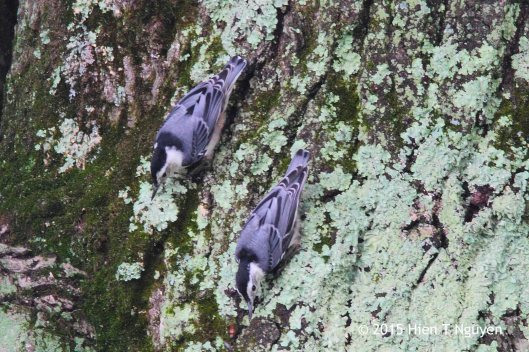 Nuthatches on tree trunk. She’s the one with two white dots on her nape.

Later on, the female landed on our deck railing and rolled over, shaking her feathers. I thought she was struck with something and was dying. I ran out, and she flew back to the oak tree to find her mate. You can say that I still have to learn a great deal about bird courtship.

This year I have been late putting out our hummingbird feeder. I was reminded last week by a hummingbird that flew around the regular feeder and buzzed me as I was standing near it. Got the message, helicopter bird!

For the past few days, he has been monopolizing the feeder, chasing away a female that could not even land on it. How would he find a mate with that kind of behavior?

Early this morning, I took the following shots of this handsome fellow, very regal in demeanor as you can see. 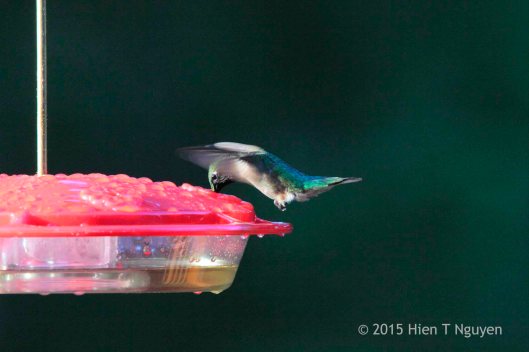 There is a flock of Glossy Ibises at the Edwin B Forsythe National Wildlife Refuge. Birds of Pharaoh Thot, Glossy Ibises originate from Africa but have migrated and established themselves in the Americas.

When I see them, they are always looking for food, their curved bills half immersed in the water of the marshes. 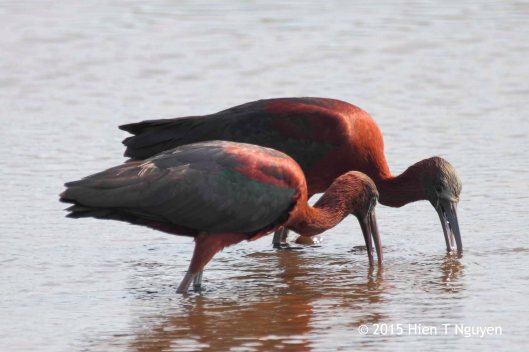 While taking photos of Ospreys and Willets, I saw a pair of Glossy Ibises flying gracefully overhead and quickly shot the following.

Raccoons are one of the few animals native to North America, although they have now been introduced to Europe and Japan. I saw the following Raccoon twice on Wildlife Drive at the Edwin B Forsythe National Wildlife Refuge. It calmly crossed the road to go get a drink in the marshes. 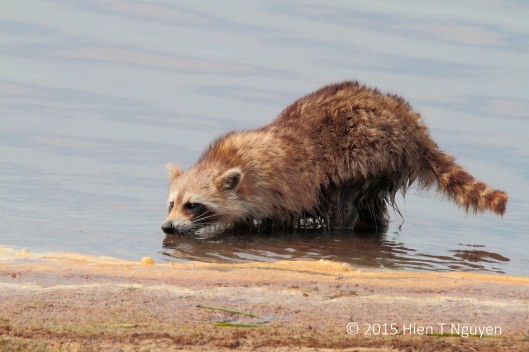 Once done, it headed back, aiming straight at my car!

At the last moment, it swerved and walked among the reeds, sniffing here and there. I lost sight of it for a few minutes, and put the camera away. Then I almost jumped out of my seat when it reappeared right under my car window. However, it continued walking back in the direction it came from. I was too stunned to take any picture.

Raccoons can be a predator to Ospreys, and I did notice that some Osprey nests which had birds incubating are now devoid of life. I wonder if the above Raccoon had anything to do with it.

As it hunts for food, Black Skimmers leave amazingly perfect straight lines on the water surface as seen in the following photos. Two days ago, a pair of Black Skimmers put on an aerial show and spent several minutes flying back and forth in front of me. However, they did not seem to catch anything that I could see. 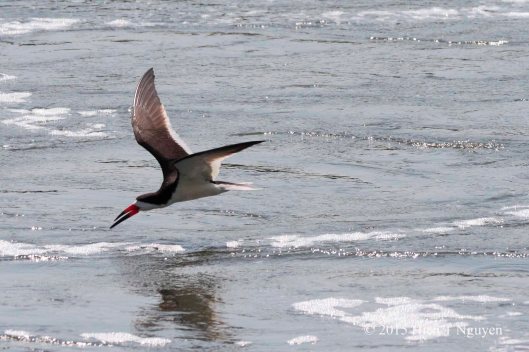 I heard the sound of fish jumping in the water, probably scared by the skimming action, but maybe they were too big for these birds to catch.

Yesterday I finally saw young chicks in some of the Osprey nests at the Edwin B Forsythe National Wildlife Refuge. The one shown below had two, possibly three, chicks who were very hungry.

After a few minutes, the mother reminded her stoic mate that more fish was needed. 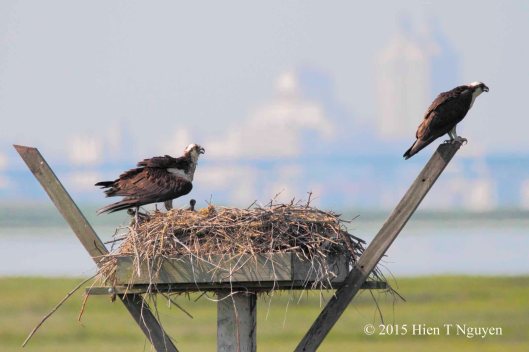 Mama Osprey: We need more food, dear. Will you go get more fish?

A pair of Ospreys that I have been observing every time I drive through the Edwin B Forsythe National Wildlife Refuge must have young chicks by now, although they remain unseen in their nest. Yesterday, the mother was not incubating but standing guard at one side of the nest. 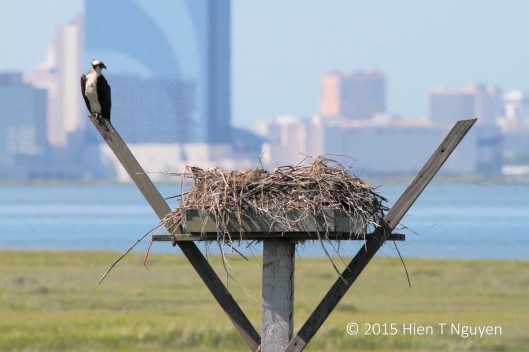 About a minute later, her mate, who is quite a handyman (handybird?) returned with some twigs to build up the nest even higher. 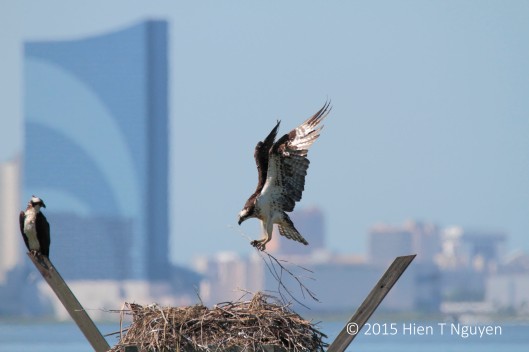 Male Osprey, the handyman, returning to nest with twigs.

He started rearranging things as she watched.

Suddenly, she jumped in.

Female Osprey jumped into the nest.

She grabbed the remaining part of the fish which was her meal, after he had previously eaten the head. 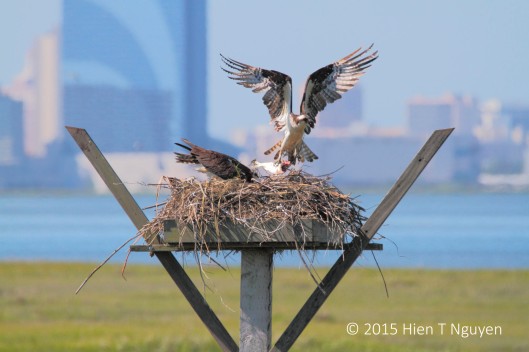 Holding the fish with her feet, she circled the nest. 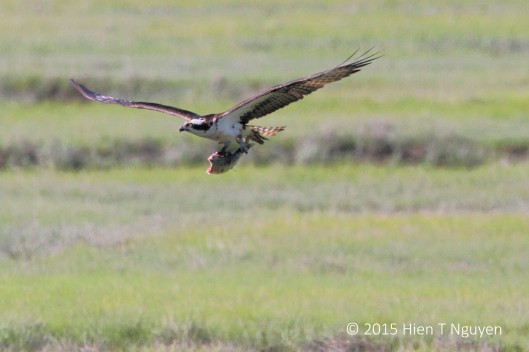 Female Osprey flying around nest with fish gripped in her talons.

Then she landed back. 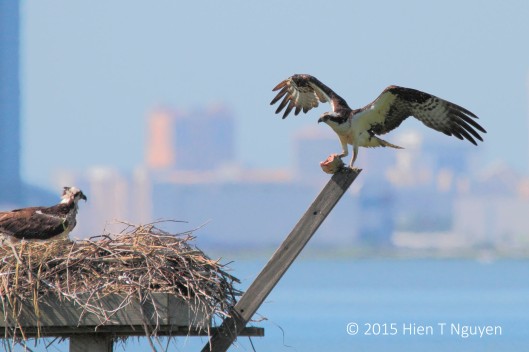 She proceeded to eat the fish while the handyman kept working on their nest.

Female Osprey eating fish while her mate worked on their nest.

The refuge has seven or more Osprey nests, but this couple has the best looking and well-built fortress.

This is this week’s challenge: https://dailypost.wordpress.com/dp_photo_challenge/vivid/ and, coincidentally, just three days ago the following cactus flower (Schlumbergera epiphyllum) bloomed in our house. The plant is over 20 years old and every year it sends forth these bright red, pink, and white flowers one after another. They don’t have any fragrance. 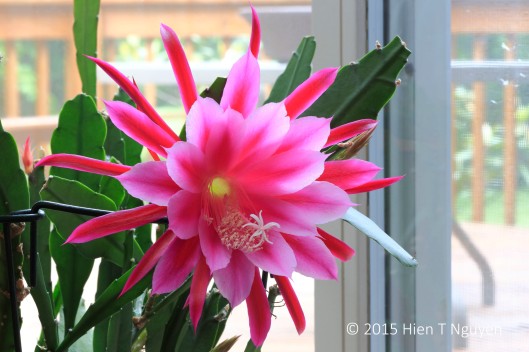 Red Cactus Flower. Note the bud of another flower on the left in the background. 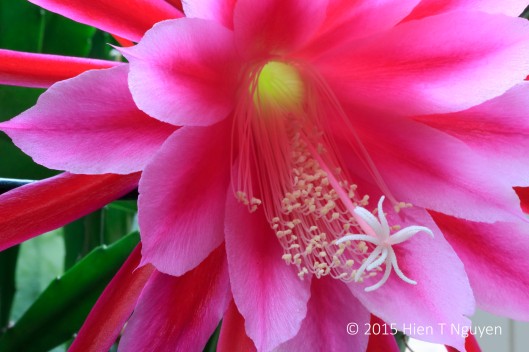 Among birds, the best aerial acrobats must be tree swallows. Every time I see them they are darting left and right, up and down at all angles, never staying in one place long enough for a decent photograph. However, three weeks ago, I saw one lonely swallow perched at the top of a birdhouse at the Edwin B Forsythe National Wildlife Refuge, apparently resting and enjoying a nice breeze ruffling its feathers.

Tree Swallow on top of birdhouse

It stood there for several minutes, even after it saw me. 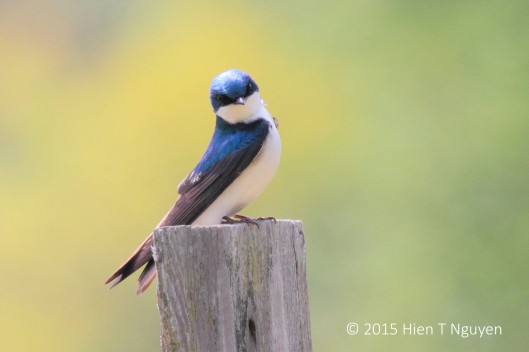 Tree Swallow: You finished taking pictures of me?

The staring contest ended when I had to leave and continue my drive. The swallow, however, stayed at the same perch.

Monday was a cloudy and rainy day. At the Edwin B Forsythe National Wildlife Refuge a Great Egret was standing by himself, very dainty and haughty in full breeding plumage.

A family of Cannada Geese with nine goslings loved the weather and went in for a swim.

Great Egret: “I tell you, this is why we need birth control!”

Of course, the goslings thoroughly enjoyed the water. 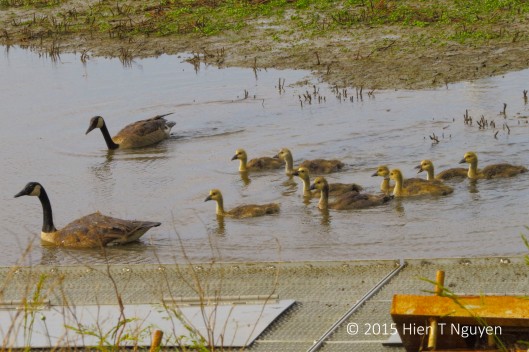 Second gosling from the right: “Who cares what he says!”

As they hunt for food, Forster’s Terns like to hover over the salt marshes at Edwin B Forsythe National Wildlife Refuge. They fly in small loops and dive into the water at fairly high speed to catch some fish, not always successfully. This makes them somewhat difficult to photograph, and I’ve tried to do that many times. It’s only a few days ago that I was able to get some shots where a tern has actually caught a meal. 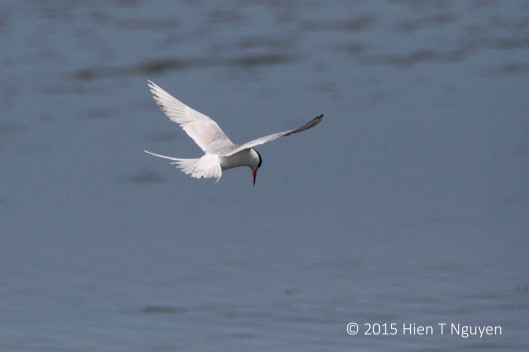 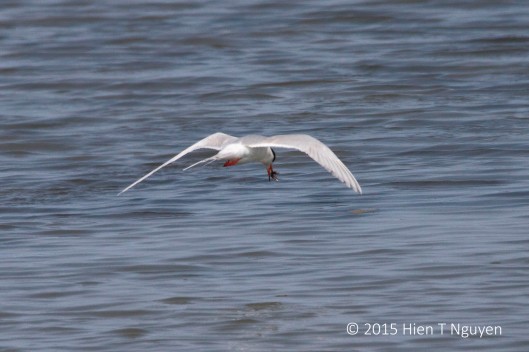 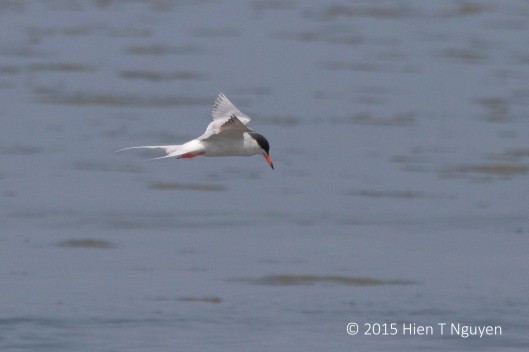