Some more shots of autumn scenes around Acadia National Park. 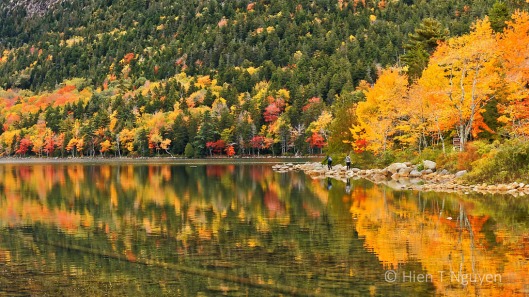 These photos were taken a month ago. By now, Acadia probably looks bleak, like the frozen ferns in the following shots. 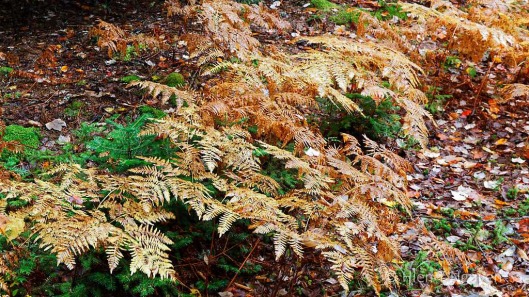 It has been raining all day, heavy at times. A remedy for that is the following shots taken in Acadia National Park only three weeks ago. It was cloudy and rainy too, but autumn colors were still vivid, and there were some interesting boulders. 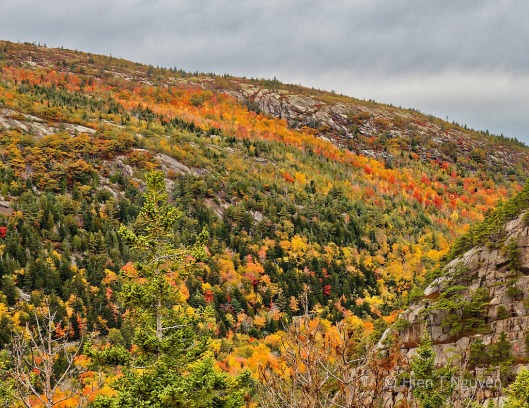 View from top of South Bubble.

The famous rock on top of South Bubble mountain.

Another boulder near the above one.

Another boulder in the same area of South Bubble mountain. 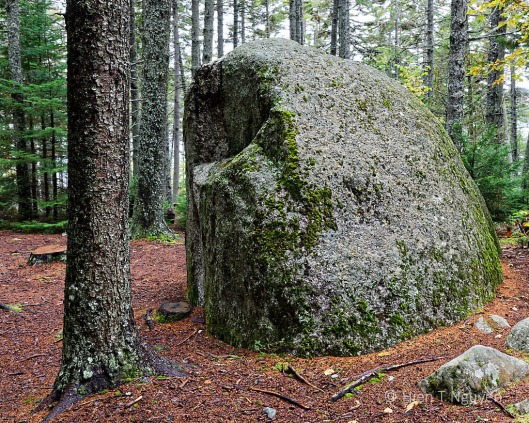 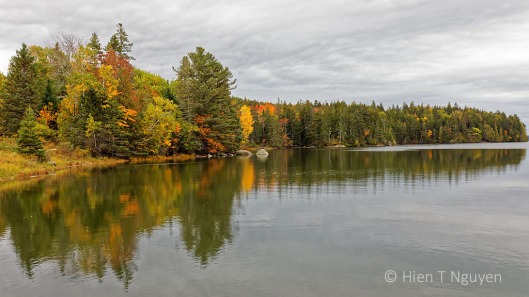 Autumn scene near Bass Harbor, ME.

Some more shots of autumn colors in and around Acadia National Park. 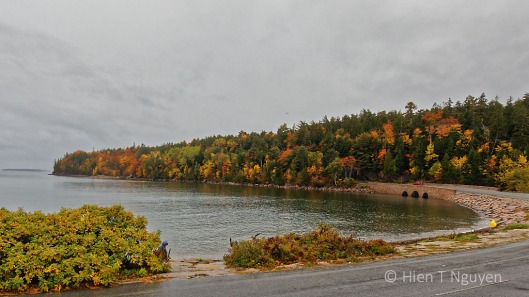 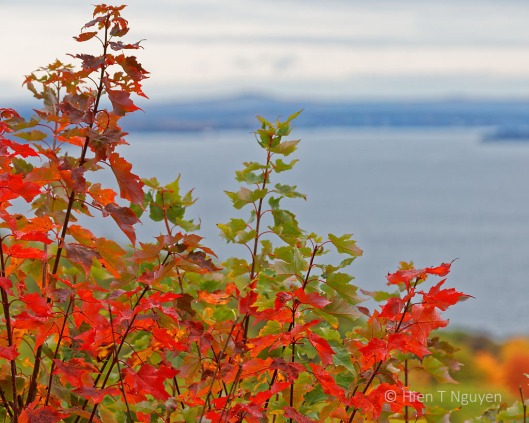 Under the rain, I drove to the Schoodic Peninsula which is a separate part of Acadia National Park near Winter Harbor. It does not have as many visitors as Mount Desert Island where Bar Harbor is located, and on a rainy day there were only two cars, mine included, on the road. The Schoodic part of the park was practically closed for the season, and the rain and wind sent me taking pictures of the local life. 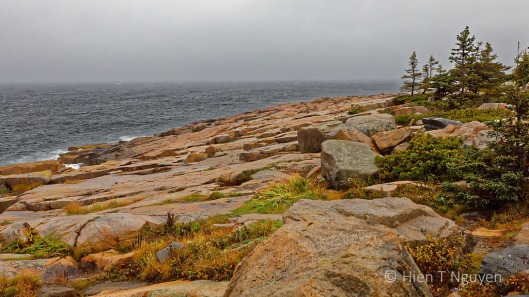 Coastline on Schoodic Peninsula on a rainy day.

Beside tourism, the people living around Acadia National Park depend on the lobster industry as a major source of income. Lobster traps and boats can be seen at almost every harbor. 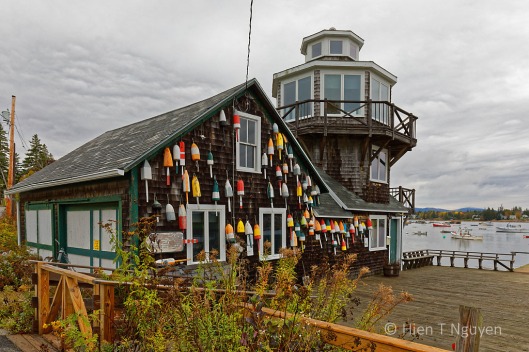 During the time I spent at Acadia, the main road into Bar Harbor, ME was undergoing repair and repaving. It became a temporary one-way street, with a major detour through the park when one wanted to go the other way. Traffic was severely congested, and parking a nightmare. I only went into town once and that was enough.

Bar Harbor is well known as the place where the rich and famous live or spend their summer. In the fall of 1947 a giant fire was fanned by wind and lasted more than a month. It completely burned many cottages, hotels, and over 10,000 acres (4,000 ha) of Acadia National Park. Regrowth of the forests occurred naturally, and it is said that the park looks better now because of the fire.

Here’s a view of a part of Bar Harbor from Park Loop Road above it.

In this next shot, you can see three cruise ships anchored along Bar Harbor water front.

View of Bar Harbor from Park Loop Road with cruise ships anchored in the distance. 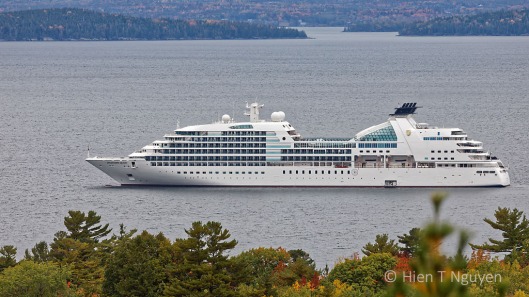 There is currently no pier or terminal for the cruise ships, and small boats are used to ferry their passengers to Bar Harbor and back.

The town expects 230,000 cruise ship passengers in 2018, a 257 per cent increase from 2003. In the fall, one big cruise ship alone can disgorge as many as 6,000 passengers into Bar Harbor, which had a total population of 5,434 in 2017. Naturally, the natives are grumbling! Although the tourist season has been extended and benefits business as a result, issues about congestion, pollution, and quality of life have been raised. A recent proposal to build a terminal for cruise ships has met with local opposition and it may never be built.

For a couple of hours that day, it didn’t rain after that beautiful sunrise captured earlier. I went for a short hike to South Bubble mountain, one of the two small mountains that are visible from Jordan Pond. 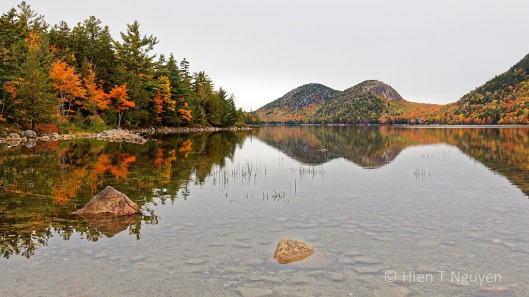 The Bubbles as seen from the South end of Jordan Pond, near the entrance.

The Bubbles from Jordan Pond.

The hike to Bubble Rock on top of South Bubble was short and not too strenuous, even when the ground was not completely dry. 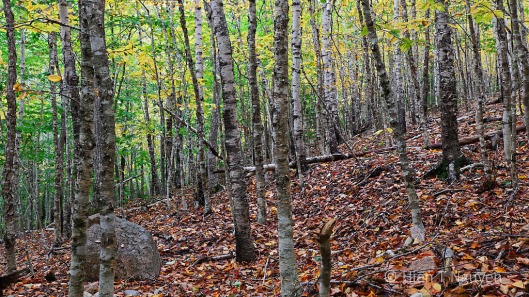 Trees and a boulder seen on the way up to South Bubble mountain.

At the top was a big boulder perched on the mountain rocks, looking like it was ready to tumble down to the road or the gorgeous valley below. Bubble Rock was moved there a long time ago by a glacier that carved out what is now Acadia National Park. 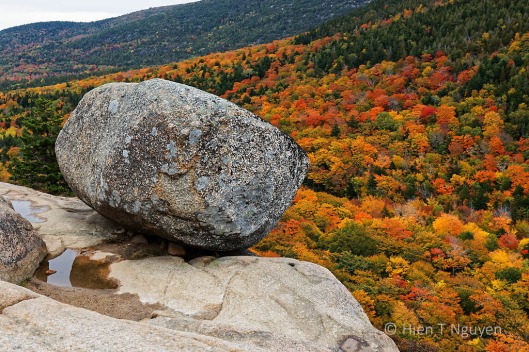 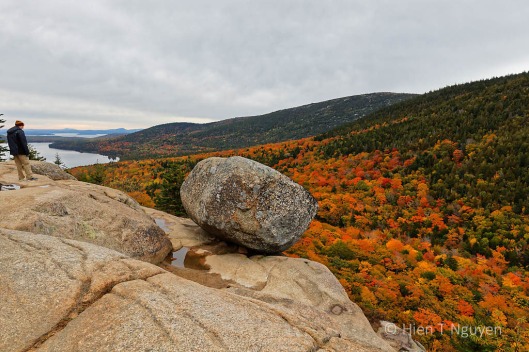 And here’s the million-dollar view from Bubble Rock.

After the no-show sunrise on Cadillac Mountain, I drove to Bass Harbor where one of the most photographed lighthouses is located. The Bass Light Station, as it is officially named, looked small up close, standing only 32 ft tall, or less than 10 meters. It is currently the residence of a member of the Coast Guard, so you cannot go inside it.

It is a functioning lighthouse with an occulting red light which is on for 4 seconds then off for 4 seconds, day and night. It used to belong to the Coast Guard but in November 2017, Acadia National Park announced that it will take ownership. It is working on renovation plans to make it more accessible and “revenue producing”!

To shoot the iconic photos that you often see of the lighthouse, you need to wait for low tide and then climb down some stairs to jagged and slippery rocks on the beach. It was not a pleasant experience but still many visitors, including young children, did it. Following are some photos that I took while sitting or leaning on the rocks. Please let me know which one you like best. 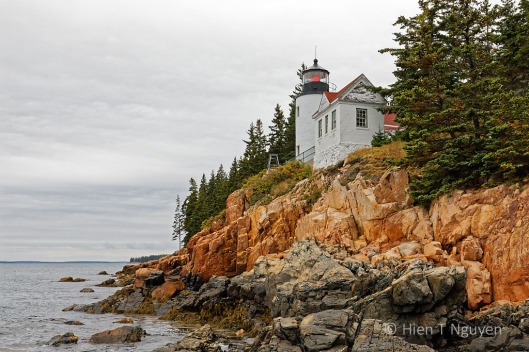 Here are two views of the beach. 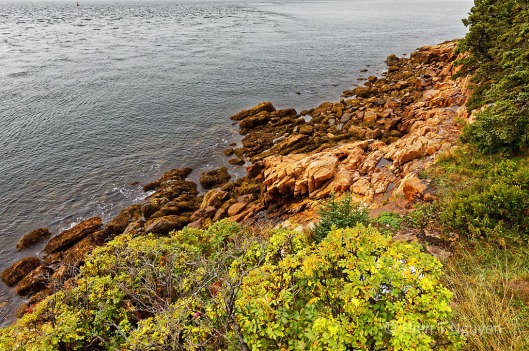 The sunny and bright skies along Kancamagus Highway gave way to cloudy and rainy weather for every day that I spent in Acadia National Park. As a result, heavy clouds and rain will affect most of the photos I will be posting about Acadia.

On the morning after arrival, I got up early and drove to the summit of Cadillac Mountain, 1530 feet (466 meters), the tallest point in Acadia, where one can see the sun rise the earliest in the Eastern United States. It was not raining, but the sky was completely covered with clouds.

On top of Cadillac Mountain to see the sun rise.

Other sun watchers also arrived, on foot or by car, then huddled together for warmth as they waited for the sun.

People kept checking their watches or cell phones, but the scheduled time came and went, and the sun kept itself well hidden. There was gradually more light, but without the brilliance and warm colors of a rising sun.

At the top of Cadillac Mountain with no sunrise.

Disappointed people started to leave, either hiking down or driving their car to the town of Bar Harbor. The only indication of the presence of the sun behind those clouds was a sliver of pale blue horizon. 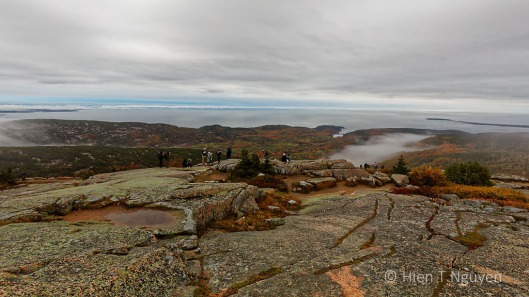 The following day, I also got up early to go do some hiking. There was a superb sunrise as I drove by Hulls Cove, just before the entrance to Acadia. Here was the sunrise I wanted, and it was at sea level. I will always wonder what it would have been like if I had photographed it on top of Cadillac Mountain. 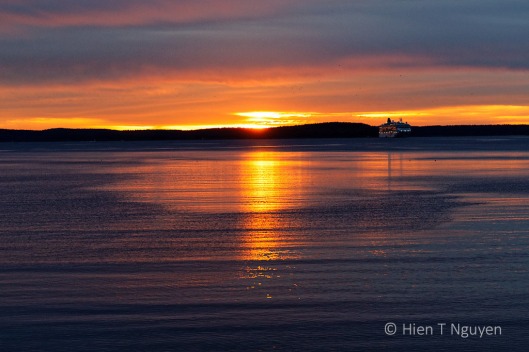 Sunrise at Hulls Cove, Acadia National Park. On the right of the picture was a cruise ship anchored for the night.

Sunrise at Hulls Cove, Acadia National Park, a minute after the above shot.