For this challenge, all I can think of is a field of sunflowers I saw last month on my way to and from work. I took the following shot as the brilliant morning sun illuminated the flowers and turned them to gold.

For this Weekly Photo Challenge, I took the following picture at the Edwin B Forsythe Wildlife Refuge after the sun had dipped below the horizon. It wasn’t easy. As I was the only human being they could attack, the mosquitoes converged on me and drew blood . So I had to hurry up and there was no time to check or change my camera settings.

For this challenge, I am posting a photo of Red Knots in flight over the Delaware Bay. These birds migrate every year from Artic areas to Tierra del Fuego at the tip of South America, a distance of 9,300 miles and one of the longest migratory paths of any bird.

Red Knots over the Delaware Bay

Today, I made one more trip to the Abbott Marshlands, only 15 minutes by car from our house. Right away, I was struck by the sight of wild sweet pea flowers growing along Spring Lake. I had brought along my trusted old 100 mm macro lens and put it to good use. 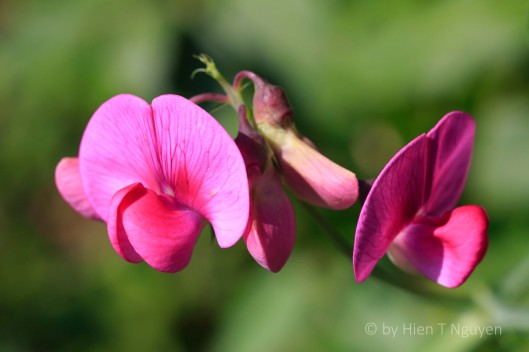 On the way back, there was this baby turtle trying to hide among some grass. The turtle is on the logo of Abbott Marshlands. The Lenape tribe who used to live in the area named a nearby creek Tulpehocken or Tulpehaking, meaning turtle land.

Big black ants found the old hummingbird feeder soon enough, and they had quite a good time in its sugary water. So I had to buy a new feeder, one with a moat that I coated with glue to stop the ants from crawling into the feeder. It worked, the ants did not come back, and here are some photos of the male ruby throated hummingbird feeding from it.

Don’t disturb me, I am busy!

If you look carefully at the above picture, you can see the hummingbird tongue reaching all the way down to the bottom of the feeder.

Aaah! That was good.

While hiking through the Abbott Marshlands yesterday, I was struck by the beauty of wildflowers. Here are the more outstanding ones for this time of the year:

Purple loosetrife adorning a beaver dam. The bird on the upper left is a red breasted blackbird.

Mute swans are not native to North America and were brought over here in the 19th century from Europe for decorative purposes! They also do not migrate much, staying around most of the year, unlike other types of swans that range from the Artic Circle to warmer regions depending on the season.

Over the past several weeks I have taken pictures of mute swans at the Edwin B Forsythe Wildlife Refuge near Brigantine, NJ and at the Abbott Marhslands on the Delaware River in New Jersey.

Here’s a pair of swans at EBF, where a daily influx of ocean water makes for a much cleaner environment.

The following pairs were at the Abbott Marshlands. 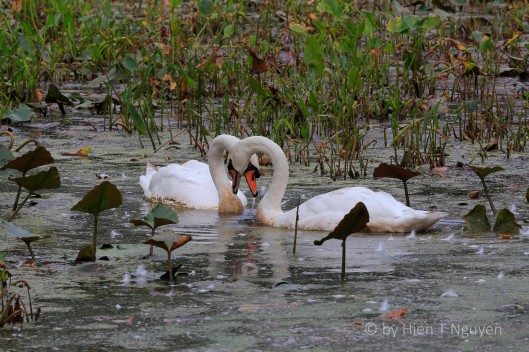 The white feathers you see floating on the water came from the swans when they were preening themselves. The swan on the right was stretching and making some noise, even though they are called mute swans. They are only mute when compared to other swans, such as the trumpeter swan.

The above pair had a young cygnet gray in color, but I could not find it. Instead I took the following pictures of the parents as they looked for food. 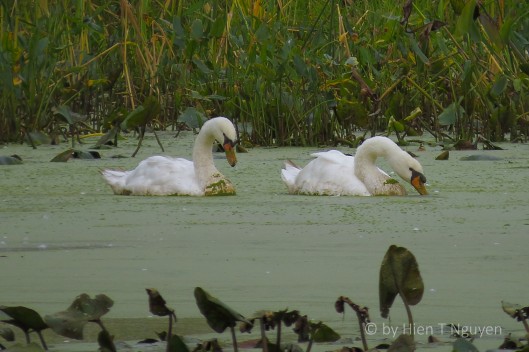 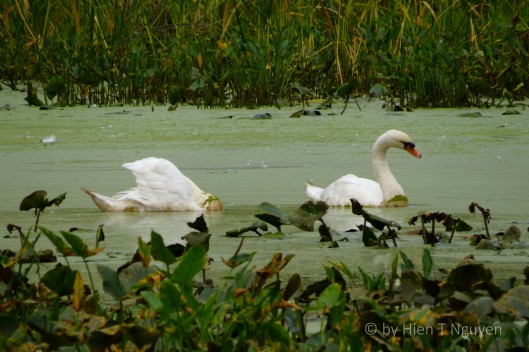 For this weekly photo challenge, I am submitting a photo I took this morning at Abott Marshlands near Hamilton, NJ. A pair of Canada Geese were walking on the mud banks at low tide, and one of them had a broken wing that was almost touching the ground. Since the injured bird was larger than the other, I am assuming it’s a male. The female goose followed him faithfully, but I don’t know what she could do for him. I also don’t know what caused the injury, but it could be the result of an attack by some predator, such as an eagle or a turkey vulture. In any case, it must have been quite an adventure for this pair of geese! I hope he will somehow survive his ordeal.